Cincinnati soccer boosters are hoping to score $4 million in the state capital budget with the goal of bringing a major league soccer franchise to the city.

The request is part of a much larger package of infrastructure initiatives that local governments in Hamilton County are hoping will lead to a 21,000-seat soccer stadium and a Major League Soccer franchise for the city.

In Toledo, economic development leaders are looking to the state capital budget process for $10 million to cover convention center improvements. In Columbus, local leaders want $5 million for upgrades at the Center of Science and Industry downtown, while Cleveland is requesting $5 million of its own for riverfront improvements.

The requests are among many big-ticket items local governments and development groups are targeting for the local projects portion of the coming state capital appropriations bill.

Legislators and metro-area economic development groups have submitted their requests for the funding measure. The bill, which is also expected to include reappropriations for ongoing capital projects, is being eyed for introduction later in February and passage by April.

The local projects make up a relatively small portion of the capital spending bill, which includes funding for other large state projects, but usually consumes most of the planning and negotiations among lawmakers. The capital budget for last biennium totaled $2.62 billion in appropriations, but just $160 million of that was for community projects. Officials say the preliminary funding target for local projects is less this cycle at about $130 million.

Senate President Larry Obhof (R-Medina) said this week the overall total is also expected to be lower than it was two years ago.

Cincinnati Region: The highlight of the Cincinnati area’s requests is the FC Cincinnati stadium proposal, but that project accounts for a fraction of the nearly $22 million in requests from the region.

Other major items include $2 million from the Cincinnati Museum Center for a project to advance STEM education, and $2.5 million for the expansion of capacity and recovery units at the Hamilton County Justice Center.

Dayton Region: The region’s top priority in the Montgomery County region’s list is the Arcade Innovation HUB, a joint venture between the University of Dayton and The Entrepreneurs Center. The region requested $2 million for the HUB, which would include mixed-use space for academic, research and experiential learning programs from UD and programs to help startup companies through TEC. The total project is expected to cost more than $41 million.

Another top request in Montgomery County is $1 million for a $17 million renovation project for YWCA Dayton’s flagship facility.

The region also requested money for projects in surrounding counties, led by nearly $1.9 million for the Greene County Career Center. That project, called the Take Flight Initiative, is designed to provide aviation, aerospace, engineering, manufacturing and technology training. The overall price tag for that project is $60 million.

Area officials also requested $2.2 million for the modernization of the archives center at Wright State University. That project would include environmental controls to preserve records and the space to house 16,000 linear feet of collections and more than 20,000 books and journals. The total cost is anticipated to be $8.2 million. 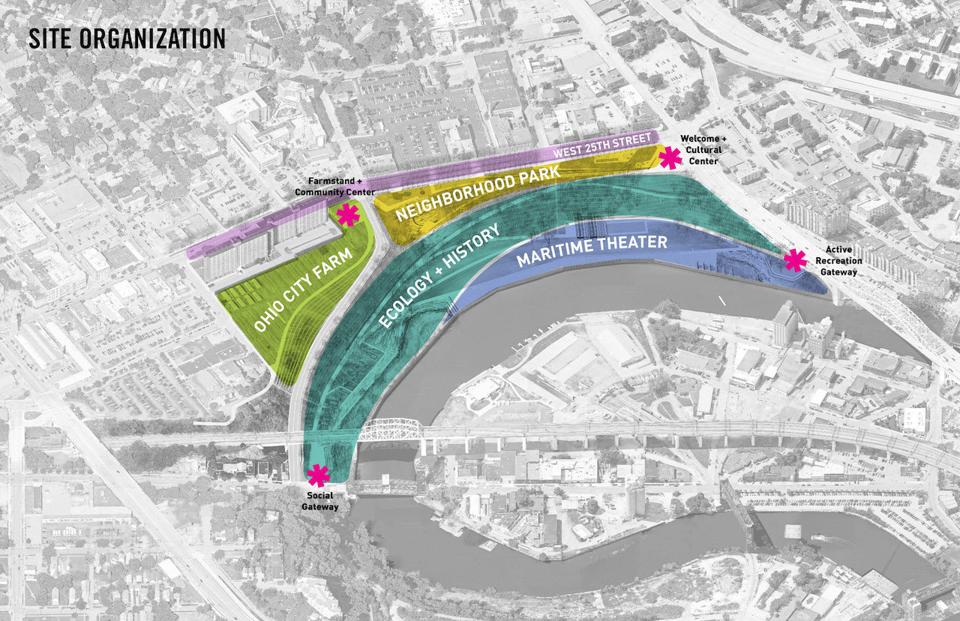 Cleveland Region: The Greater Cleveland Partnership’s recommendations are led by a $5 million request for the second phase of restoring the Irishtown Bend on the city’s riverfront. The work would include stabilizing the bulkheads along the bend and starting work to turn the top of the hillside into a public green space. (See Gongwer Ohio Report, December 18, 2017)

CCH Development Corporation, part of the MetroHealth System, asked for $1.25 million for a neighborhood innovation space along the W. 25th Street corridor, and Karamu House asked for $2 million as part of a $4 million capital campaign aimed at redesigning its campus.

Columbus Region: The biggest ask on the Columbus Partnership’s wish list was for $5 million for the redevelopment of COSI. That project has a total cost of $40 million.

The group is also asking for $2 million as part of a larger project for a 35-story tower where the parking lot of North Market now sits. The Market Tower grand atrium and arcade project is expected to cost $115 million in total.

Another request comes from the Columbus Regional Airport Authority, which is asking for $2 million as part of a $4.85 million air cargo terminal ramp expansion.

The Columbus region also asked for $2 million for park development on former quarry land in Northwest Columbus. The overall cost of the project is $20 million.

Another big project from northwest Ohio is a $5 million request for the first phase of changes to the Toledo Museum of Art. That project includes the installation of new elevators to make it more accessible, the renovation of the Glass Crafts Building and the creation of an art support building.

Other big projects out of Toledo include the Imagination Station Theater Experience, for which the chamber is asking for $3 million and a new senior center and $2 million for the Wood County Committee on Aging.

The Akron Civic Theater project is expected to cost a total of $6.35 million, with the anticipated project cost of the Hudson parking facility at $5.56 million.

Other big projects include the Barberton Municipal Justice Center, with the city seeking $1 million in the capital budget of a total project cost of $14.3 million.

Youngstown Region: The Youngstown/Warren Regional Chamber list of priorities include $7 million for the Mahoning Valley Innovation and Commercialization Center.

Another major project requested was a community literacy, workforce and cultural center in Campbell, for which it asked for $3 million. The chamber also requested $1.4 million for a transitional housing project helping veterans in Mahoning County.

In Trumbull County, the chamber requested a number of projects, including $1.8 million for the City of Niles to modernize the Eastwood Field baseball facility. That project would include a new video board, energy efficient lighting upgrades and a new playing surface.

The Eastwood Field project and others in Trumbull County also appeared in requests from the office of Sen. Sean O’Brien (D-Bazetta). Both lists of requests also included $2.3 million for the construction of a compressed natural gas fueling station.